1 EMERCE100: Digital is more than just technology
2 Webinar: how to get everybody on the same page using storytelling
3 Advanced tips for using velocity in Sprint Planning in a Scrum Team
4 How the designer can support the PO in agile product development
5 The key to a successful digital transformation
Most large cities in the world are struggling with mobility. All urbanites grapple with their daily commute, whether they are stuck in traffic, aren’t able to find a spot on their preferred mode of public transportation or are packed in like sardines. LA’s and Beijing’s daily traffic jams are (in)famous and only the lucky few that work from home or live close to their office are exempt from this daily strife.

However inconvenient, this situation provides the perfect breeding ground for mobility initiatives such as Dott. Dott is a shared-mobility service that provides electrical scooters for shared use in large European cities and aims to “improve cities by offering green mobility for everyone,” according to CEO & co-founder Maxim Romain.

For this episode of our podcast Innovative Leaders by INFO, we spoke with him about how it all started, scaling up, their roll-out strategy, Chinese lessons, creating the best product, traffic safety, how culture can add to your success and the future of micro mobility by Dott.

How it all started

Romain has lived in big cities all over the world and experienced first hand how transportation and mobility can be difficult when living in a metropolis. Therefore he was delighted when Chinese ebike company ofo contacted him and (his now partner) Henry Moissinac to see if they could help them launch in Europe. Sadly for ofo, due to subpar hardware and maintenance, they didn’t make it in Europe. But their endeavour did spark something with Romain and his partner as they saw how the shared-ebike service almost sold itself: “[The bikes] didn’t need any marketing. Once they were on the streets, people used them.”

“Every employee at Dott is a shareholder. This causes them to act and think like owners in everything that they do, which directly adds to the success of the company and makes everybody feel equally responsible.”

And so they decided to launch Dott, a safe, affordable and economically and environmentally sustainable alternative to Chinese and American ebikes. They started out in August of 2018, but have already raised €20 million in investments, employ about 190 people, are available in multiple major European cities and provide about 500,000 rides per month.

Scaling up & rolling out

Luckily for Romain and his partner, scaling up isn’t hard. Essentially, they started out with a sort of concept store (“A term we borrowed from retail.”): they launched in one city, optimized what needed to be optimized and then replicated it in another city. However simple this sounds, they only move on to another city when the service runs smoothly in the previous city. Romain likes to take his time to achieve perfection: “Our company motto is we don’t want to be the first, but we want to be the last.”

He also explains that they have a very careful selection process when it comes to which city to go to next. First of all, it has to be a large city, because that’s where their service has the biggest impact and secondly it needs to meet their list of criteria concerning population density, infrastructures, political landscape, regulatory landscape and local competition.

Isn’t it hard to find cities that want to participate? “Not really,” says Romain. “In general, most, if not all, European cities want to reduce pollution and the number of cars, and because of this want to promote shared mobility.”

When it comes to growing the company itself, they have a pretty straightforward approach. “We do what makes sense and add people where they are needed,” states Romain. He does add that he finds it hard to find a balance between investing in new talent and reaping the rewards from adding that talent, however: “You have to be careful with your cash.” 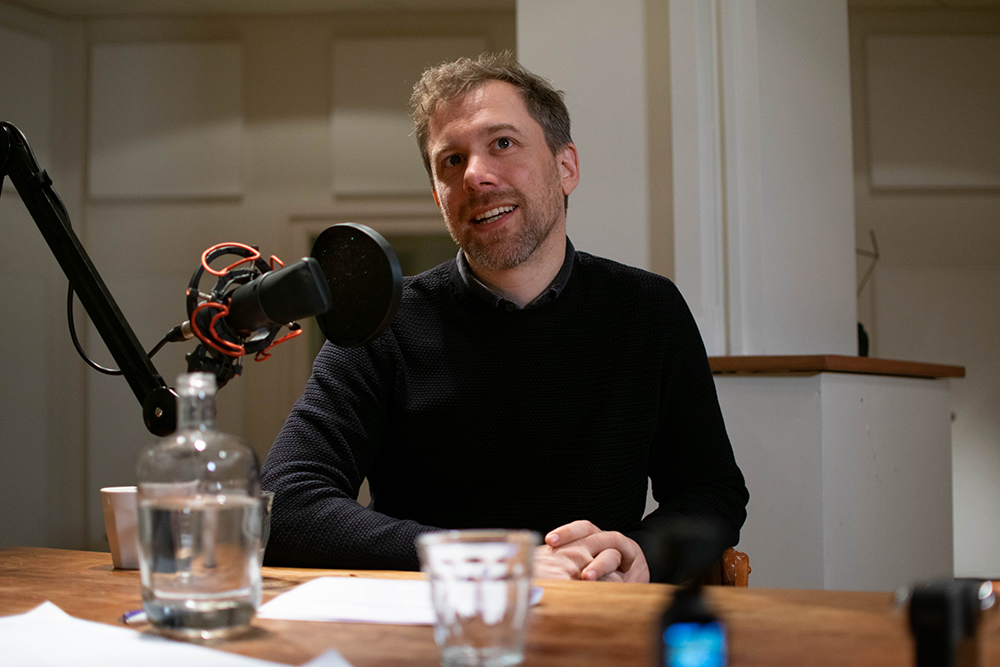 Romain and his partner learned a lot from the failed attempts of Chinese and American companies to conquer the European market. The most important of which is that in order to succeed you need to make a robust and durable product. Romain says: “People aren’t careful [with the escooter] ‘cause it’s not theirs. You have to create a product that can withstand such a hostile environment.” The second thing Romain learned from the Chinese is that they not only have to take their time to design and create a durable product, but also to master operations in the targeted area, i.e. closely monitor and manage the hardware, reparations and maintenance, as well as the relationship with the city. “That is why we do and have everything in-house,” states Romain.

The fact that the Dott escooter is already on its third iteration, even though the company is only about a year and a half old, proves that Romain takes product development extremely seriously and that they would rather take their time to create a perfect product than go for the quick bucks that a quick launch would bring.

According to Romain, the perfect product meets four criteria:

Dott waited for six months to launch its first custom-made escooter that was especially created for the sharing market. It had mechanical brakes, a large deck and big wheels for extra stability and everybody loved it. 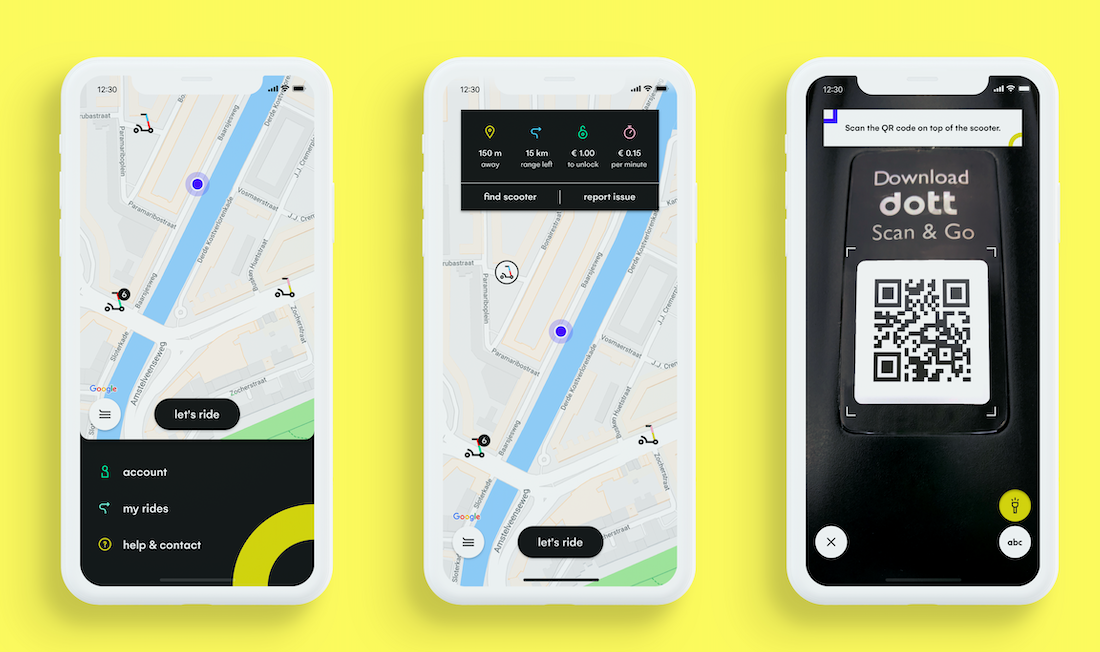 Unfortunately, Romain and his people quickly discovered that the first generation escooters (that made up about 80% of the fleet) had a weakness in the stem. The challenge then was if they were going to repair all 8,000 escooters or if they were going to replace the whole fleet: “We had to choose. We could take them off the street and wait three months, which might kill the company or we could [stand by] our principle, which is safety. In the end, we decided to go for safety for our users, because that’s the most important, you don’t negotiate on that.” After this incident, they were able to eventually finish their investment rounds with the 20% of the fleet that didn’t have any problems and kept the company afloat. Since then, the industry kept evolving and Dott evolved with it.

Obviously, traffic safety is a hot topic for Dott. Romain explains that the operator and the city are equally responsible for safety. Naturally, it’s the operator’s responsibility to provide safe and durable products, and to educate the users on safe usage. The city is responsible for providing the infrastructure, like bike lanes, that allows for such mobilities and to protect riders from cars.

“The Netherlands have rules pertaining to escooters that no other country has.“

When asked when we can expect Dott in the Netherlands, Romain explains that the Netherlands have rules pertaining to escooters that no other country has, like mandatory turn signals. So Dott is now developing an escooter that meets the many Dutch requirements. For this, he collaborates with consultants that (used to) work for the RDW (Dutch Vehicle Authority) and he expects to launch the first Dutch escooter coming December. Exciting!

Corporate culture as the basis for success

As is true for most modern start-ups, Dott has a very strong company culture. Romain: “For us, it’s important to define what we believe in, so we have four values: transparent, emotionally conscious, getting things done and family. This is why people want to join us, what creates a bond within the team and influences how we operate.” This shared culture enables them to work together efficiently, without having to discuss every little detail, because they all think the same and operate from the same ideology. Additionally, Dott isn’t hierarchical at all: “We don’t have C-levels, we have [project owners].”

Another aspect of Dott’s corporate culture is the fact that he and his partner decided early on that every employee should become a shareholder. This causes them to act and think like owners in everything that they do, which directly adds to the success of the company and makes everybody feel equally responsible.

How Romain created this admirable corporate culture? Simple. He is super clear about what he believes in and what his views on success are, and communicates this often, starting out with a lunch that he has with all new employees in which he explains about the company and its values. Finally, he recruits people that are aligned with his views and beliefs and that fit in with the existing culture. “Then, it will happen almost naturally,” he says.

The future of micro mobility

Romain very much looks forward to the future. Not only is he planning on rolling out his service in ten European cities this year, but he expects that with the addition of these cities, Dott will finally become profitable. He predicts that in five years, Dott will be available in 50 cities (“We go for quality, not quantity.”) and that they will provide a fully integrated shared mobility service that people can use with a Dott pass, which connects Dott with other mobility providers and public transportation. He is also developing ebikes and thinking about other variations on the existing escooter.

He thinks that his next big challenge will be that the shared mobility industry will be increasingly regulated and that that will mean more tenders and more limitations for operators. However, he is confident that Dott’s winning combination of a collaborative corporate culture and superior and durable hardware will make the difference and enable them to win tenders and conquer the market.

If you would like to know which tips Romain has for other innovative leaders and who he looks up to? Check out our podcast Innovative Leaders by INFO here.

Mobility as mirror of our (social) behavior