1 EMERCE100: Digital is more than just technology
2 Webinar: how to get everybody on the same page using storytelling
3 Advanced tips for using velocity in Sprint Planning in a Scrum Team
4 How the designer can support the PO in agile product development
5 The key to a successful digital transformation
As we all know, beer is brewed with four basic ingredients: water, grain, hops and yeast. MiniBrew, manufacturer of the world’s first all-in-one fully automated brewing system and platform, adds something else to the mix: innovation.

For this edition of our podcast Innovative Leaders by INFO, we dove into the world of beer brewing in the 21st century with MiniBrew’s co-founder/creative director, Olivier van Oord and CEO Edwin Blom. With more than twenty employees and around 200 installed machines, it’s time for new investors to scale up, to reach their ultimate goal: “to create the best beer possible”. We discussed sustainability, disruptiveness, MiniBrew’s journey from concept to product, investors, NextGen Leadership and MiniBrew’s future aspirations.

According to Van Oord, a couple of events led to the inception of MiniBrew. First, he met somebody who introduced him to traditional home brewing (“you know, with pots and pans”). A little later, he met with his cousin who had a lot of experience with building pasteurization and carbonization machinery. Finally, in 2013, he met Bart van de Kooij and they got to talking about how to make beer more sustainable. They wanted to create a company that was bigger than its commercial aspirations, a place that contributes to making the world a better place and improves peoples’ quality of life. Van Oord: “We said to ourselves, ‘What is the biggest disruption that can be made in the beer-brewing world?’ and […] we saw that the real problem is not selling the beer, but the distribution chain.” And so, the first seeds for MiniBrew were planted.

Disrupting both the chain and the industry

We collectively drink 185 billion(!) liters of beer each year. As you can imagine, that requires a lot of bottles, which creates large amounts of waste and equally large logistic hassles. Moreover, a lot of brewed beers lose (some of) their flavor over time, which doesn’t bode well for the special bock beer that is brewed in the Netherlands and has to be shipped – per actual ship – to, for instance, Australia. That is why Van Oord and Van de Kooij came up with MiniBrew. MiniBrew replaced the traditional three-keg system with a single-keg system that’s connected to the platform through IoT, which cuts brewing time in half and takes up a lot less space. This allows for a more affordable craft beer that you can brew from the comfort of your own home, that comes straight from the kettle and that tastes better because it’s made with local and therefore super fresh ingredients. 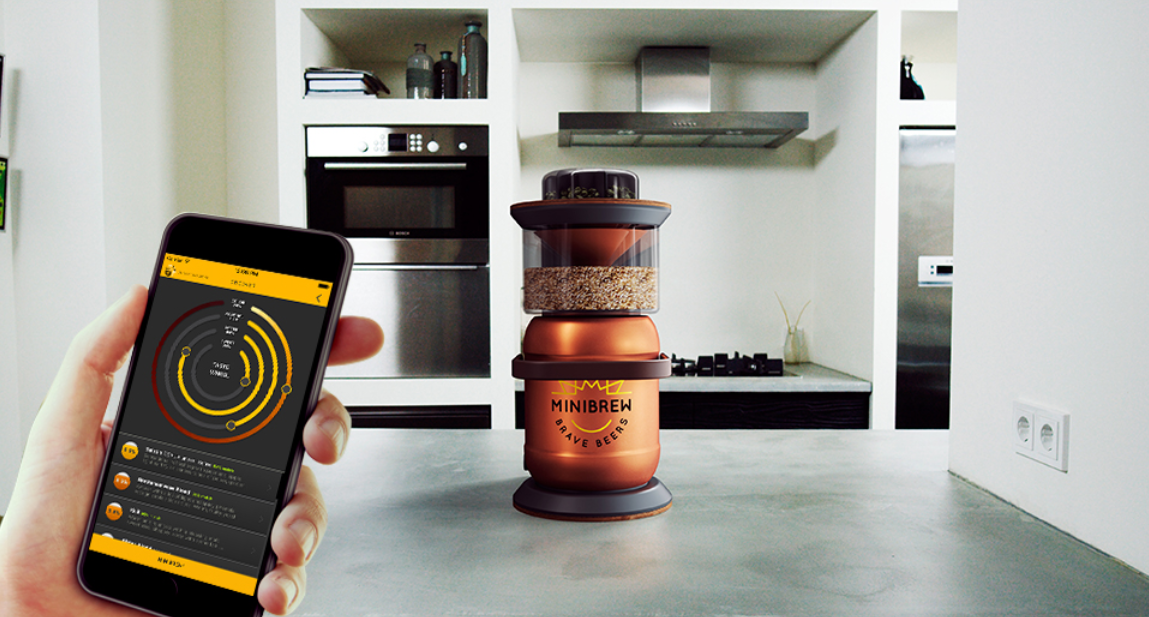 What truly makes MiniBrew innovative however, is the fact that they added a digital platform where homebrewers can meet each other and exchange experiences and recipes. They wanted a place where all those free-thinking, beer-loving, DIY-minded, creative spirits could come together and connect. So, is MiniBrew a brewing or a tech company? Van Oord laughs: “We’re a beer-brewing tech company.” Blom adds: “Normally, for homebrewers, their journey ends at the door. With our platform, their journey expands to bigger markets and the global community.”

The journey: from concept to product

Speaking of journeys, MiniBrew took a while to get where they are today. The first year and a half was spent by building their technology stack, getting a patent, acquiring IP rights, building the actual prototypes and finding an investor. Once that was done, they gave themselves one month to sell 35 machines through an Indiegogo campaign. By the end of that month they sold over 115 machines! Van Oord: “This brought along our first lead investor and we knew then that we had a viable product.”
Of course, they encountered some challenges as well. Van Oord: “The amount of time, money and commitment that was needed before having a successful product was highly challenging and caused friction. […] Additionally, finding an investment for the patent and the hard work it required to patent something that didn’t exist yet and then scale it worldwide was very challenging.” 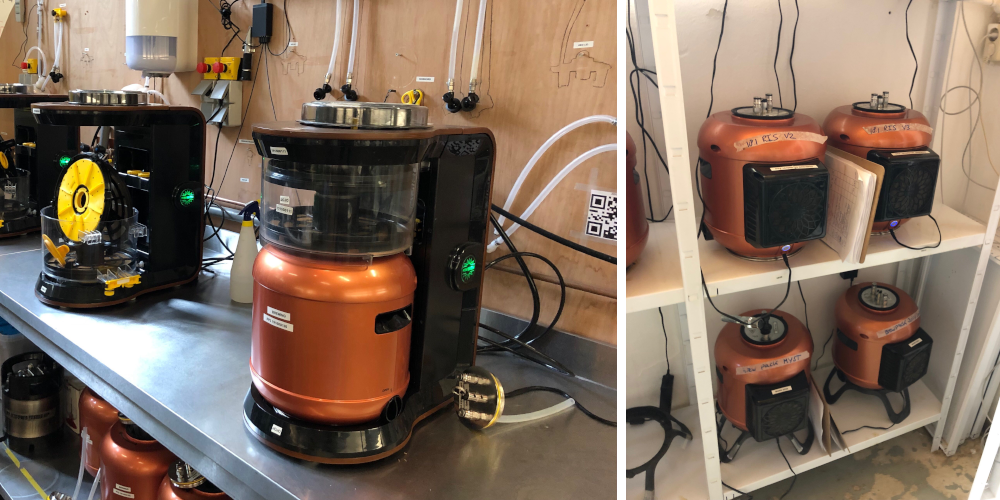 Investors and where to find them

Challenging or not, MiniBrew was lucky when it came to finding investors. The old saying ‘you never know how a blind man may sometimes hit a crow’ held very true for Van Oord and his partner. After landing their initial investors and ready for their next phase, they were blowing off some steam in a bar one day when they met a couple of guys that were interested to know why the craft beers that Van Oord and his buddy drank were as expensive as the cocktails that he and his friend were enjoying. They got to talking and by the end of the night, Van Oord had a new investor. It didn’t stop there however. According to Blom, you need new investors for every new phase that your company goes through and that is why they are looking for new investors right now, to accompany them during their scale-up phase.

Blom is the epitome of a NextGen Leader: he understands that it’s his role to define the bigger picture in which his employees can move freely, that he has to empower his people to be the best they can be, that he should allow them to make mistakes and that his team is the beating heart of his business. His advice for other NextGen Leaders is “work from the heart, learn from your team, respect and listen to them and bring together the right people at the right time.” 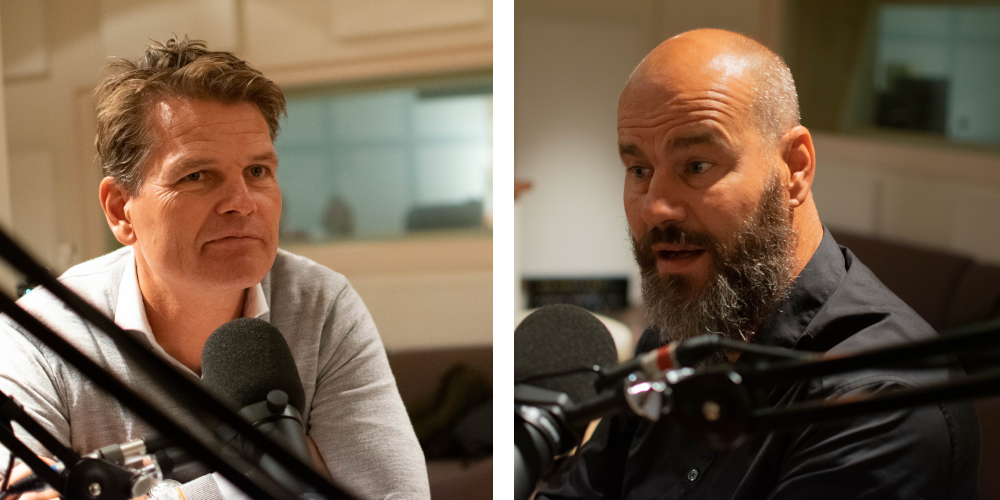 With this upcoming investment round, Van Oord and Blom hope to find a partner that can help them scale up. Blom: “The scale up is not so much about engineering, but about the customer experience, quality insurance and translating the learnings into new features and software.” This is not their only aspiration however. Van Oord: “In five years, we want to have penetrated the North American market, have 60K to 80K customers on the platform and have a $50 million revenue. We want to be the standard in DIY brewing and be an internationally recognized platform for the homebrewer of tomorrow.” In the five years after that, MiniBrew wants to enter the B2B market with machines that hold up to 350 liters of beer. An ambition worth toasting. Cheers!