How Centraal Beheer innovates to become the most beloved service provider

How Centraal Beheer innovates to become the most beloved service provider

1 EMERCE100: Digital is more than just technology
2 Webinar: how to get everybody on the same page using storytelling
3 Advanced tips for using velocity in Sprint Planning in a Scrum Team
4 How the designer can support the PO in agile product development
5 The key to a successful digital transformation
An insurance company that also helps with chores around the house? A financial service provider that’s also there for you when you’re stranded on route? Something that consumers probably wouldn’t expect but for Centraal Beheer Achmea the way to distinguish from the competition and “to innovate and remain relevant,” says Linda Nieuwenhuizen, Senior Manager New Business & Services.

Five years ago, Nieuwenhuizen founded Centraal Beheer’s innovation lab, Lab55. In the lab, a team of 48 men and women works on developing the different services that, together with the standard insurance policies and financial products, are part of the 100-year old insurance company’s innovation goals. The underlying ambition of these innovation goals is to become the Netherlands’ most beloved service provider by 2030. Nieuwenhuizen explains: “This means that ‘no’ won’t ever be an answer [to the questions our clients ask us].” When asked if that’s not a difficult goal, Nieuwenhuizen laughs: “It’s quite the challenge to say the least, but I believe we can do it.”

For this episode of our podcast Innovative Leaders by INFO, we spoke with Nieuwenhuizen about the difference between providing insurance and providing services, the necessity of staying up to date, experimental innovation, stage gates, nay-saying departments, Artificial Intelligence and stomach aches.

Insuring vs. providing a service

As stated previously, Centraal Beheer has the ambition to become the Netherlands’ most beloved service provider. At first sight, this might look like a completely new and innovative concept, but according to Nieuwenhuizen this is something that Centraal Beheer has been doing all along: “The funny thing is, that when you look at the core [of our business], we have been doing nothing but providing services for the longest time, although it’s hidden behind our insurance policies.” The difference between insuring and providing a service seems a lot smaller than we first thought, it’s more about the exact moment of the request for help. With their insurance policies, Centraal Beheer takes care of its clients in the event of an issue with their home/car/health. With their services, they assist both clients and non-clients before something goes wrong. They’re even there when nothing is wrong per se, but the client simply doesn’t feel like hanging up that lamp themselves or painting their window frames. So it’s mostly about service and assistance in a broader sense. Nieuwenhuizen: “We just want to be there for you at the times that matter most in your life.”

Two services that Centraal Beheer now offers – thanks to Nieuwenhuizen’s innovation lab and her team – are the on-demand roadside assistance service, RoadGuard, and the Klushulp for odd jobs in and around the house.

“Centraal Beheer is even there when nothing is wrong per se, but the client simply doesn’t feel like hanging up that lamp themselves or painting their window frames.”

Flexibility as a necessity

Something else that we want to know from Nieuwenhuizen is why Centraal Beheer chose to reinvent itself like this. She says this has multiple reasons: “One of the reasons is that the world is moving at a great pace, which also affects our company.” Additionally, the insurer also had to deal with new players in their field, such as Google, Amazon and Lemonade but the changing climate also influenced this decision. Centraal Beheer noticed that the changes in our weather patterns also have an effect on the storm damage they have to deal with. Moreover, the wants and needs of their clients are becoming increasingly important: “Clients are becoming much more demanding. As they should, since we’re living in a society that offers almost endless possibilities. If your company isn’t continually reinventing itself, you risk becoming irrelevant,” according to Nieuwenhuizen. And what is it exactly that a customer wants from an insurance company? Nieuwenhuizen says that that doesn’t really differ much from what they want from other companies: fast and personal service.

Centraal Beheer’s mission and vision includes becoming a service provider. And not just any old service provider but the best loved service provider of the Netherlands. This is only possible, says Nieuwenhuizen, if they put together a range of insurance policies and services. The idea behind Lab55 is developing new services that will eventually be included in Centraal Beheer’s assortment. But how does that work? How do they decide what the next RoadGuard or Klushulp will be? Nieuwenhuizen explains that they look at different factors when developing such services but that it’s mostly about the new service fitting in with their brand and the other services that they’re currently offering. Additionally, they start client research immediately after the initial idea was introduced. “And,” Nieuwenhuizen reveals, “it’s usually not even our idea but the client’s.”

Lab55 uses data to find out about the wishes and desires of their customers. If, for example, a client is unhappy because their specific damage isn’t covered by their insurance policy, Nieuwenhuizen and her team immediately spring into action: “We really take those situations to heart. We then start thinking about how we can solve the problem and research the market to see if other people are experiencing the same issue.” 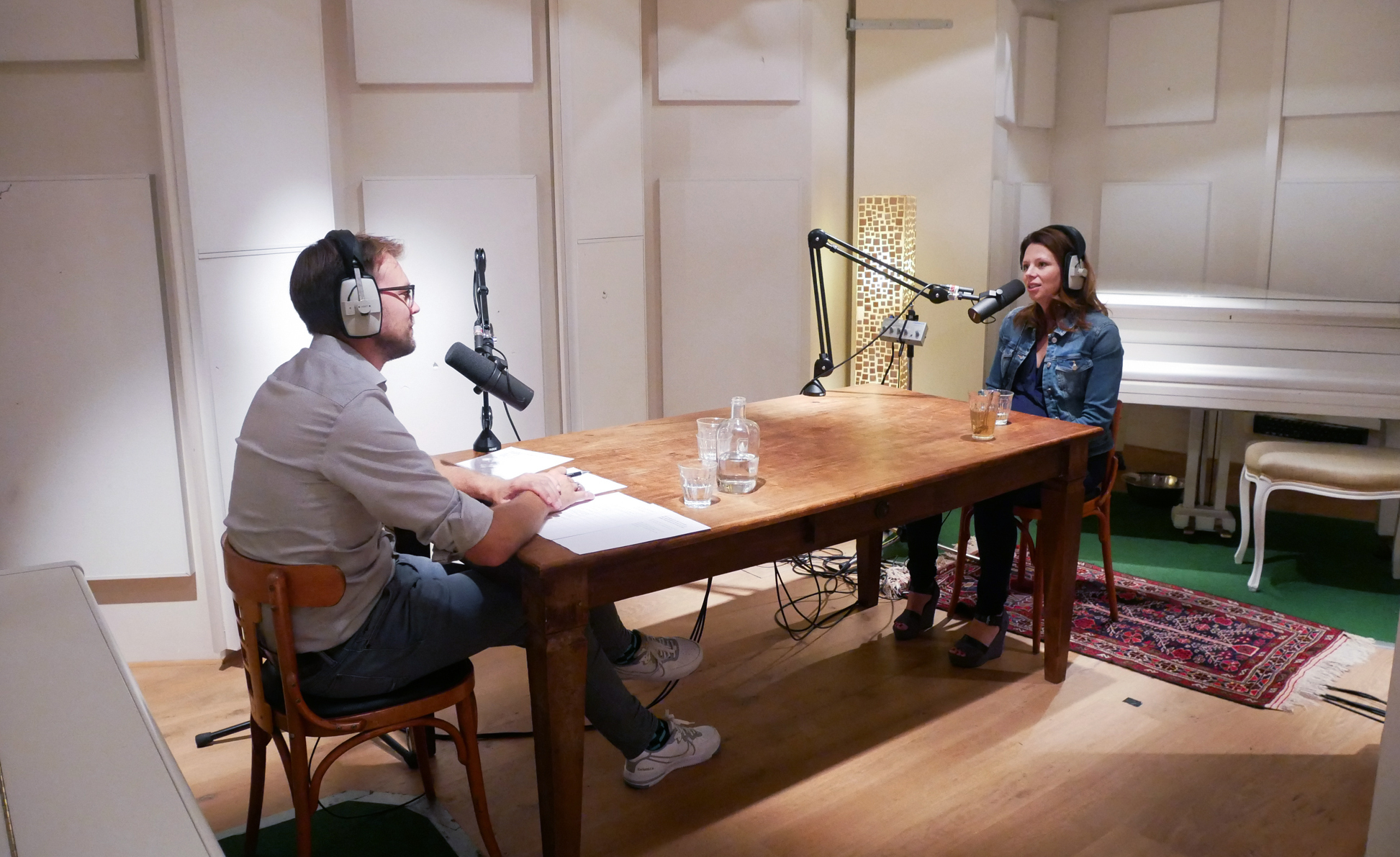 Nieuwenhuizen and her team on average conduct two experiments every week. Their goal with this is twofold: on the one hand, they strive to come up with one solution every three months that they are actually going to develop and on the other hand, they are looking to go live with three services each year. A quick calculation tells us that eight services per year are in development, three of which have to be successfully brought to the market. So far, they have succeeded each time “surprisingly enough”.

But how do you determine which ideas are rejected and which you will continue to work on? Just like ABN AMRO, Centraal Beheer uses stage gates. Each idea goes through three stages (gates): exploration phase, MVP phase, and the scaling phase. Nieuwenhuizen: “At first, it’s important [to prove] that there’s a market for it.” If that’s the case, she and her team present the idea to management and the board of directors. When the stakeholders back the idea, they proceed to the next phase. Ideas that don’t survive the stage gates are thrown out or saved for a later date.

Funnily enough, she’s not sure about what happens to ideas that make it to the last stage, because they only now have a couple of services that are currently growing and are now in the process of being reviewed for further development. This is difficult, states Nieuwenhuizen, because first of all, services and insurance are two completely different things, that it secondly takes about seven years for a service to become profitable, and finally because the idea has to be integrated in the current offering and not all departments are suited for that. “We’re speaking different languages,” says Nieuwenhuizen, “at first, it’s not about what you will earn but what you can learn. Afterwards, you can start talking about the ROIs in terms of numbers or euros.”

Nieuwenhuizen is convinced that the most important condition for innovation is the support of stakeholders. Nieuwenhuizen: “I think that [at the beginning] I spent 80% of my time talking to stakeholders.” Together with them, she created the new mission and vision, and formulated the ingredients needed to have it become successful. Nowadays, she includes stakeholders (and other interested parties within the organization that she refers to as the “nay-saying departments”) in different ways:

With companies as big as Centraal Beheer, some stakeholders are found outside of the company walls. Like the Authority Financial Markets (AFM). Nieuwenhuizen: “We invite them regularly so that they are included in our vision. […] This reassures the AFM.”

Competitor Lemonade is known for deploying Artificial Intelligence (AI) and we see this trend reflected in the rest of the insurance world as well. Is this something that Nieuwenhuizen also pursues? “I think we should look at that. […] But we’re not there yet. If you look at the insurance landscape, we can make huge strides with what has been called standardization in recent years.” In other words, helping the customer service employees with standard stuff, so that they can focus on what really matters, helping the customer.

“the most important condition for innovation is the support of stakeholders”

When we ask her about the most important lessons she has learned over the past few years, Nieuwenhuizen responds briefly and to the point: “Have courage, persevere and put the team first.” According to her, courage is having a bit of a stomach ache if you introduce an MVP to the market, but doing it anyway. She is also convinced that you can have all the good ideas and courage in the world but that if you don’t have a team to work on it with, nothing will come of it.
She feels that someone who puts these lessons into practice and therefore is an innovative leader that she herself looks up to is our own Prime Minister Mark Rutte: “I admire what he has done to help our country through this [corona] crisis,” she concludes.

We also spoke with Nieuwenhuizen about the future of insurance, the Even-Apeldoorn-bellen culture, the allocation of budgets, where she gets her inspiration from, and ideas that ended up in the trash. Listen to the full podcast Innovative Leaders by INFO here. Please note that the podcast is in Dutch.

The Invincible Company: a review from the digital innovation perspective