From temp job to the board room: how Speakap is taking over the world

From temp job to the board room: how Speakap is taking over the world

1 Just Eat Takeaway.com from Dutch player to globally scalable platform
2 Checklist: control your Business Innovation proces
3 Best practices from innovative leaders about developing digital platforms
4 How Talpa drives innovation and transformation in the media industry
5 The Invincible Company: a review from the digital innovation perspective
This is the story of two supermarket employees who started out with nothing but a good idea, a dream and an investor. Now, almost a decade later, Speakap has offices at seven locations in the world and their solution is used by more than 300 organizations worldwide.

Speakap is a communication platform where companies can connect their employees, even the ones that aren’t tethered to a desk. In the podcast Innovative Leaders by INFO, founders Erwin van der Vlist and Patrick van der Mijl discuss how they came up with Speakap, growing pains, investors and how important corporate culture is to them.

This podcast is also available on Spotify en Apple Podcast. Please note this episode is in Dutch.

“Ten years ago Dutch social network Hyves was very popular and their community served as our main example. We thought ‘what if we could communicate with each other online?’ and actually [Speakap] began so we could do just that.”

Speakap founders Erwin and Patrick met working at their local supermarket when they were in university. They soon found out that it was hard to communicate with each other and their co-workers in other departments. The old school message board and the cafeteria mail slots weren’t apt to spread information swiftly and efficiently and that’s when the idea for Speakap was born. Van der Vlist: “Ten years ago Dutch social network Hyves was very popular and their community served as our main example. We thought ‘what if we could communicate with each other online?’ and actually [Speakap] began so we could do just that.”

From own use to big clients

The guys started out by sketching and then, together with a digital agency and the financial backing of an investor, created their first MVP (Minimal Viable Product) after about six months. This allowed them to meet their own needs first. After that, it took them about a year and a half to come up with a product that was also suited for other parties, which landed big clients such as Nike, IKEA and McDonalds. 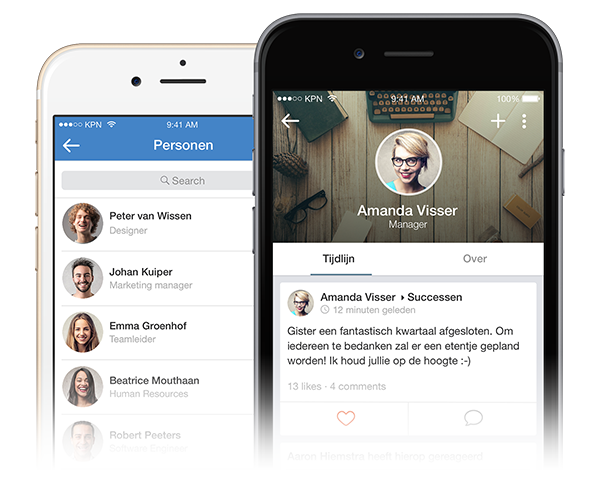 Going from startup to scaleup was easy. Afterwards, it got harder. Van der Vlist and Van der Mijl discuss a couple of pitfalls for companies that – like them – want to level up their startup to a scaleup and then turn that scaleup into a worldwide success. First, make sure that you have an experienced and knowledgeable staff. “At the time, we made a crucial mistake by hiring an all-junior staff,” says Van der Mijl. “And we paid the price for that.” It turned out that their product wasn’t scalable at all. “We decided then to start again from scratch, but this time around we hired a senior staff that was experienced with creating scalable products. If we would have to do that again in our current phase, it would have cost us dearly,” he continues. “If you have the willpower and the potential, technology should never be an obstacle and you have to make sure that you scale up in time.”

“At the time, we made a crucial mistake by hiring an all-junior staff.”

Even though they actually sketched the first version themselves, Van der Vlist and Van der Mijl needed cash to develop their MVP and to grow into the international organization that Speakap is today. They were lucky to have found an investor that they immediately clicked with and who never lost faith in them, despite the whole project costing more and taking longer than initially planned.

It also turned out that they had some great investors within their own customer base. Their clients really saw the value that Speakap added to their business, so they offered their financial help. After that, it got a little bit harder to find suitable partners. Van der Mijl: “There’s lots of investors that promise you the world, but never deliver.” Their advice is to think very carefully about who you attract/allow in this phase and to take your time making this decision.

Corporate culture is a very important part of Speakap’s success. Van der Vlist and Van der Mijl hired a strong HR director early on to map the company’s core values and to find ways to incorporate those in the company’s DNA. Then, the Culture Crew (CC) was installed to guard those values. The CC is made up by a team of people from different levels within the company who are jointly responsible for a number of projects each year that contribute to the corporate culture. We think that this is an awesome example of Van der Vlist’s and Van der Mijl’s next gen leaders status. They understand the value of great staff, that you can’t force a company culture and that you have to empower people to be all they can be. This way, they empower themselves and their company as well.

If you want to know more about Speakap, Erwin van der Vlist or Patrick van der Mijl, please listen to the full podcast.

Curious about our next podcast?
Sign up and we will keep you updated!

How MOBIAN is building the mobility platform of the future