1 EMERCE100: Digital is more than just technology
2 Webinar: how to get everybody on the same page using storytelling
3 Advanced tips for using velocity in Sprint Planning in a Scrum Team
4 How the designer can support the PO in agile product development
5 The key to a successful digital transformation
In the 21st century, our lives are dominated by convenience. Everything must be easy, fast and readily available and if it isn’t, we opt out. Traditional travel agencies, for example, have been replaced with platforms such as Vakanties.nl, and we order our meals through Thuisbezorgd. Keeping this in mind, it’s particularly interesting that an important field like healthcare has been lagging behind with this.

Over the past 50 years, next to nothing has changed about the way that we communicate with our healthcare providers: we still attend the office hours of our general practitioner (GP) or hospital and read old magazines in the waiting room when it all takes longer than expected, even if we only have a quick question.

Godfried Bogaerts, CEO & founder of BeterDichtbij wants to change that. BeterDichtbij is a service that facilitates direct communication between patients and caregivers and aims to make healthcare easier and more efficient. Users can chat with their own doctor or hospital via their mobile or computer at any time of the day. Right now, 24 hospitals and a handful of GPs are connected to the service that Bogaert created together with his business partner, Sander Bijl. He expects that all hospitals in the Netherlands will be connected to the service within a couple of years and hopes that the GPs will soon follow.

For the 10th episode of our podcast Innovative Leaders by INFO, we spoke with Bogaerts about innovation in healthcare, the difference between a software platform and a brand, user-centered healthcare, privacy, revenue models, challenges, what you should do when you move faster than the field you operate in and guts.

This podcast is also available on Google Podcast, Spotify and Apple Podcast. Please note the podcast is in Dutch.

As mentioned, healthcare in the Netherlands is pretty traditional. Bogaerts doesn’t think that unwillingness is the reason that they’re not making use of the new possibilities that exist, he thinks that this is due to the fact that there’s simply no room for reflection. Besides this, healthcare has a long tradition of providing evidence, where everything requires a comprehensive research process and has to be scientifically substantiated. For example, it took 20 years to actually launch the thermometer after it was invented. Bogaerts: “I’m not from this sector, so this doesn’t really resonate with me and I don’t think it’s necessary.” After all, this is about communication, not about new medications or experimental treatments. Moreover, BeterDichtbij solves a very concrete and current problem for both the healthcare providers and patients, or “consumers” as Bogaerts prefers to call them: it relieves pressure on the caregivers and offers the patient – excuse me, the consumer – convenience and accessibility.

“Show some guts, take the plunge and pitch your idea! The industry needs it!”

Currently, only a handful of the Netherlands’ 6,000 GPs are connected to the service, but if it’s up to Bogaerts this number will grow in the (near) future. Not only because the service is very convenient for them and can significantly reduce their workload, but also because he would like to transcend the ‘software platform’ label and become a proper brand. “I would like it to become the AAA of healthcare. So that if you want to do something in healthcare, BeterDichtbij is top of mind,” according to an enthusiastic Bogaerts. But what is the difference between launching a software platform and a brand? According to Bogaerts, with a platform you can “get in line with all the other IT providers”, but with a brand you create something that people want to be a part of: “You create a feeling of ‘so and so also uses it, maybe we should get on board, too’”. Moreover, a brand creates a support base for the service within the hospital or the general practice where it’s used, because consumers experienced it first-hand with one doctor and will then ask for it with another one. 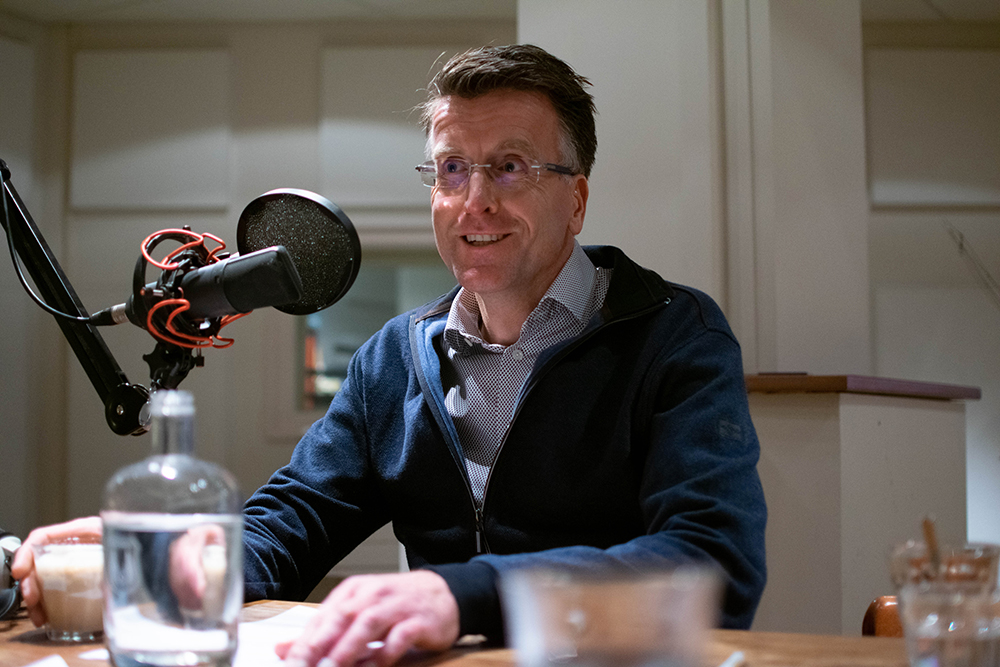 BeterDichtbij seems to be very focused on healthcare providers, but is mostly user-centered according to Bogaerts, despite consumers not being able to request the service (yet). Bogaerts: “We don’t want to be guided by what the caregivers want, but by the wishes of the consumer.” He believes that the consumer is leading when it comes to new innovations, like with the examples mentioned in the intro, and that it therefore will become “really interesting” once they start demanding and requiring different things from this sector.

“Innovation in healthcare will be driven by what the consumer wants.”

This focus on personal attention is what distinguishes BeterDichtbij from the competition, such as the British Babylon Health. This company is making good progress in the UK and some African countries. Even though Bogaerts acknowledges that this a major player and that BeterDichtbij has to hurry to stay ahead of the game in the Netherlands, he’s not worried: “Our payoff is the power of the relationship between the consumer and the healthcare providers, we’re betting on that. We know all the GPs, hospitals and insurance companies, they don’t.” Besides this, BeterDichtbij is very well-versed in the GDPR legislation of privacy in the Netherlands, something that a foreign player would have to explore before entering the Dutch market. Privacy is a very important theme for BeterDichtbij in any case and is very well organized regarding the process, the technology and the distribution of responsibility. 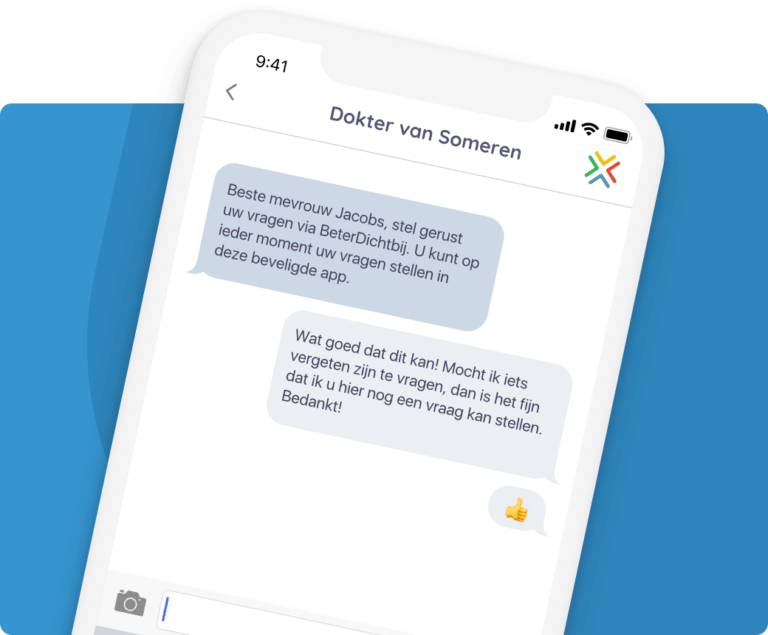 The smart watch as a revenue model

But how does BeterDichtbij make money? Bogaerts: “At the moment we’re being paid by the healthcare organizations, GPs and hospitals that are connected to our service. They pay for an annual license.” He suspects that this won’t change in the coming years, but thinks that consumers might also become a source of income in the future. BeterDichtbij will probably expand their package with a couple of consumer-only services, such as passing on data that was collected on a smart watch to a GP. It currently doesn’t use data from consumers, hospitals or GPs, but Bogaerts considers this a possibility for the future. He notes that it’s very important to find a balance between how much you want to know, what you can measure and what you’re going to do with that information. As he says: “The human body is a cool mechanism, but we don’t have to collect all the data points.”

BeterDichtbij is growing fast, only a few more hospitals and then the company is finally and definitively profitable. Sounds easy enough, but it really wasn’t. BeterDichtbij was created with the help and (financial) support of 28 hospitals. As you can imagine, it was difficult to get 28 different parties to see eye to eye, even if they are represented by a foundation like is the case here. In addition, it was difficult for Bogaerts to find his first customer: “Your team is new, your technology is new, your platform is unfamiliar. It takes guts for potential clients to give something like that a chance.” He is also currently experiencing some growing pains, “a first-world problem,” as he calls it. The company is growing tremendously, but he finds it difficult to keep up with that growth in the organization and with internal processes.

And even though it is sometimes difficult, every entrepreneur dreams of his/her organization growing and becoming the next big thing. Bogaerts has developed a special system to manage the growth roadmap and to ensure that the most useful backlog items are given priority: “We have developed a formula based on vision, users and scale. The more it contributes to these factors, the higher the position on the priority list.” 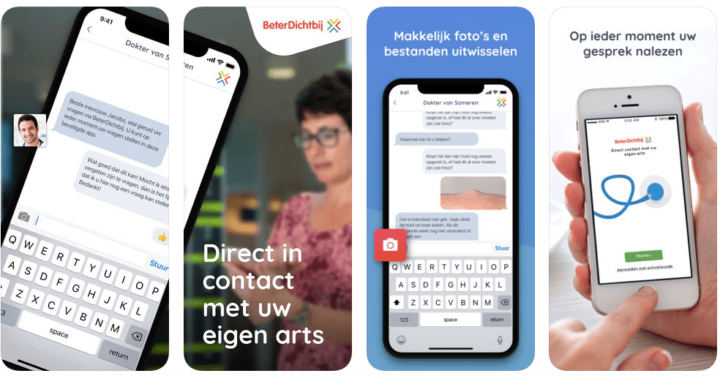 It’s very clear how passionate and driven Bogaerts is. Doesn’t it frustrate him that healthcare is super slow when it comes to picking up on new innovations? Yes and no. Yes, because he wants to go fast and is forced to make smaller strides than he would like, but also no, because BeterDichtbij’s impact is very large. He can sometimes get discouraged by a hospital IT manager that doesn’t believe in his service, while there’s a waiting room full of people who could really benefit from it, but that sour taste never lingers, because of all the thank-you letters he has received from both caregivers and consumers. “That’s what keeps me driven and focused, the consumer,” states Bogaerts. 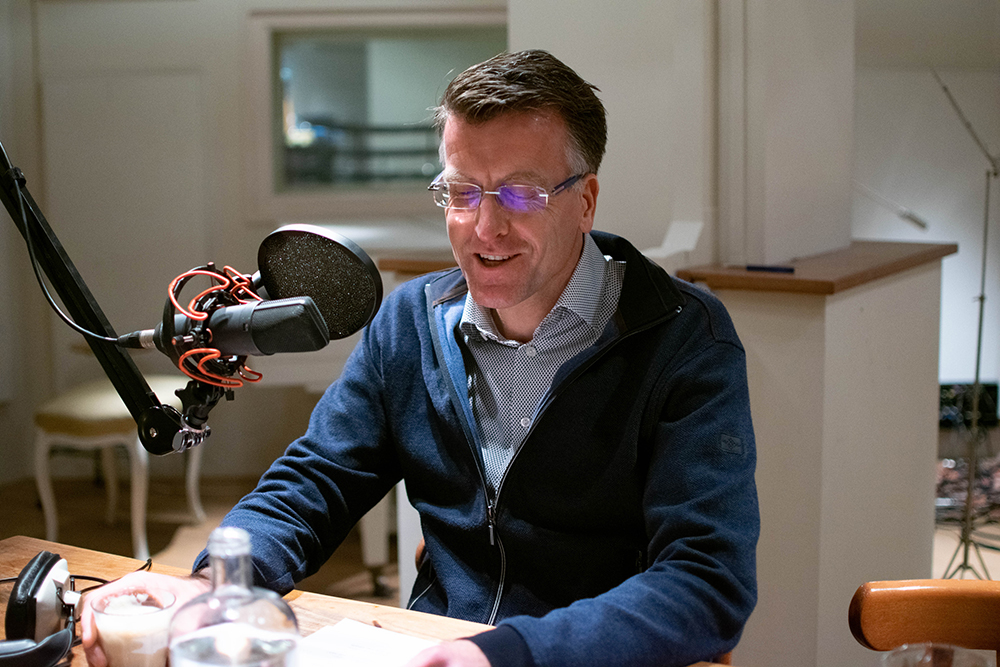 Bogaerts also has a couple of tips for other innovative leaders. The first one is “don’t go at it alone, you’ll make more progress when you’re together”. He continues, “and try to translate your drive into a clear vision for your brand”. After being in business for only three weeks, Bogaerts himself was already writing BeterDichtbij’s brand values and checking whether or not new employees fit in with those values. Finally, Bogaerts has a special message for everybody in healthcare and/or entrepreneurs that have an idea for this field: “Show some guts, take the plunge and pitch your idea! The industry needs it!”

Want to know what else Godfried Bogaerts had to say about the challenges that BeterDichtbij faces and which innovative leaders he admires? Then listen to our podcast here. (Please note that the podcast is in Dutch.)